Brown Dwarfs (BDs) are regarded as sub-stellar objects with a mass ranging from about 73 times that of Jupiter down to a few Jupiter masses. The upper mass boundary dividing BDs from stars is well defined and set at the hydrogen burning limit, whereby an object with a central temperature insufficient for sustained hydrogen fusion in its core is considered a BD. Without hydrogen fusion in the core, thermal equilibrium is never reached and the BD steadily cools with time. The boundary between BDs and planets is currently unclear and is still a subject of much debate with no IAU official definition. Numerous studies have used the deuterium burning limit as a lower BD limit, whereby an object is no longer able to fuse deuterium in its core. For a solar metallicity object, the lower limit for deuterium burning is ~13 Mjup (Burrows et al. 2001). The deuterium burning limit however, is dependant on a number of different factors such as the objects helium abundance, the initial deuterium abundance as well as the metallicity of the object (Spiegel et. al 2011). More importantly there is no robust physical justification for this limit. It has been suggested that the overlapping BD and planet regimes should be distinguished by their formation mechanisms (Chabrier 2014), with planets forming via core accretion in protostellar discs and BDs akin to stars which form in molecular clouds. 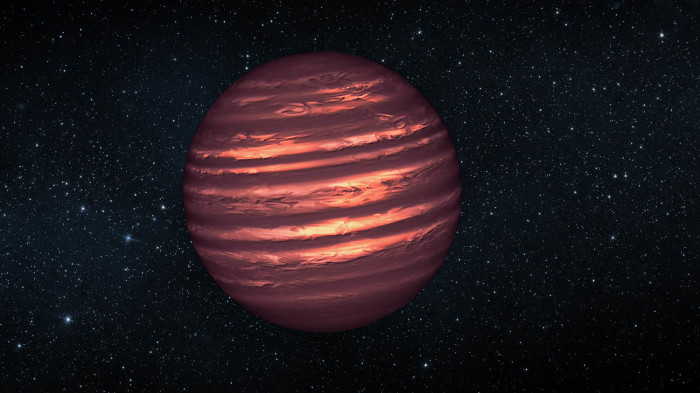 On this website, the formation based distinction will be used to differentiate BD from exoplanets. Differentiating between the two formation scenarios observationally remains a challenge as observations are difficult to constrain. One way of differentiating between the two formation mechanisms is by studying the composition of the object. If the object has formed through disk instabilities it will have a chemical composition similar to the original star forming material, whereas if it formed via core accretion it may be enhanced or depleted in some elements.

The limiting factor for spectroscopically differentiating between the two scenarios are spectral resolution and signal to noise which are ultimately governed by the brightness of the object. The high resolution observations are further limited to young self luminous objects with wide enough separations from their host star to allow for spectroscopic observations. Observations of HR 8799C, a ~10 Mjup (Marois et al. 2008) planet, by Konopacky et al. 2013 found an enhanced C/O ratio together with an under abundance of C and O in the atmosphere of HR 8799C compared to its host star. These results favour a core accretion scenario although, as the authors suggest, the results are subject to caveats related to planet migration and chemical evolution history which are unknown. Mean density measurements can also give important clues to the formation history of low mass objects within the exoplanet / BD mass regime. A measured radius which is significantly smaller than what is expected for a near solar metallicity object can indicate an enhanced abundance of heavy elements in favour of the core accretion scenario. The opposite is not necessarily true as a larger than expected radii does not necessarily mean there is an under abundance of heavy materials (Leconte et al. 2009), but could instead be due to a radius inflation which is observed in many hot-Jupiter atmospheres (Bodenheimer et al. 2003; Burrows et al. 2007; Charbonneau et al. 2000). Hot-Jupiters, jovian planets on close orbits to their host star, is discussed in the exoplanets section.